-=The Visible Dave Project=-
Can't they see through my skin, can't they see that I am nothing?
appreciate the information? drop me a line, share, or +1.

Computer Mediated Reality
These interfaces are becoming viable....we may soon look something like this. :) 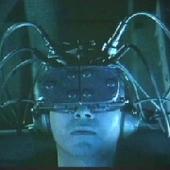 I'm pretty interested in augmented reality.  Someday I would like to dive into this area more.  Here are some of the resources and papers that are of interest to me.
augmented reality to augmented virtuality.

An simple example of this is shown on ARToolKit's Homepage: What good is augmented reality?

Well using this technology we will be able to replace our normal vision with computer vision. Some day there will be VR google that display camera input in realtime to the user. So that when the user moves their head they get a realtime update of what the CCD sensor senses. The eye and the camera will be calibrated and the computer will enhance and warp the image to correct for any lense distortions.

So it is already cool that we can correct for bad vision using a computerized vision system. But is really gets cool when we start to integrate computerized data with your normal everyday vision.

For example, lets say you want to start taking classes at a university. You would look up how to contact that university online and get contact information as well as digital maps of the university for your augmented reality computer to ingest and process while you are at the university.

Now when you call the university, (using your augmented reality computer with wifi video sip phone) your AR machine can position a picture of the person you are talking to, of where you are on campus. You literally will have a heads up display for life.

Think about it, if you could build a computer to recognize faces, you would never have to remember names ever again. The computer would already know the person and label the person in your perspective. Very neat!

I know it sounds a little out there, but here is some research that suggests we are closer to this than you might think.

Many thoughts about AR become very interesting when we think about retinal imaging systems. I'm a big fan of Ray Kurzweil, and believe such things will be available if time prevails. If you haven't read or heard anything by Ray, checkout: Killer App Expo - Ray Kurzweil (hosted in my hometown)

yup, some day soon...
Head on up to 'South Park' with Oculus Rift and have yourself a time